BENIN-TOGO trip
I struggled to plan my visit to Benin and Togo because there is such a lack of information in comparison with other more visited places in the World. Also being ex-French colonies would explain why the majority of the travellers would be from the French speaking world and would not leave many reviews in English. Even the information for visa processes varied depending on the source of information. In Togos case even the embassy in Europe could not confirm the requirements for visa on arrival at the border check-point. Hmmm

These are pure cash societies so plan accordingly. We could not even pay for the hotels on a card (however € was accepted a few times). We knew this prior to travelling so it wasn’t a surprise for us at least. Banks do exist and they’re the best place to be actually during the day as the air-conditioned room is a nice escape during the heat of the day for half an hour or so.

DAY 1
COTONOU
At arrival in Cotonou airport we were greeted by a nice bunch of immigration officers. As we did not have an eVisa in advance we asked for visa-on-arrival (VOA). That did not surprise anyone and we just had to wait until everyone from the flight cleared immigration. Yellow fever cards were checked of course. We were escorted out to the office to get the VOA (actually had to stop at the currency exchange as all payments to be made in CFA only). The officer did not mind waiting for us while we exchanged the €. In the office all was straight forward and after answering a few questions (“How long?”, “Tourist?”) visas were added to our passports and we paid all visa fees as expected (10.000CFA). 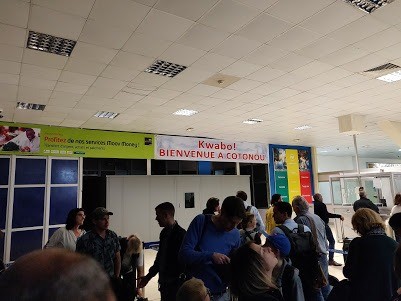 If you do book a hotel in Cotonou at anything from €50 a night upwards the airport transfers are normally included. This was a fantastic service as it was late in the day and in an unknown place it was good to have someone waiting for you.

DAY 2
COTONOU – PORTO NOVO – GANVIE – COTONOU
The next day after a simple breakfast we were met by our tour guide for the day. After weeks and weeks of research and chats on WhatsApp this was booked with all details arranged. The tour included Cotonou city – Porto Novo – Ganvie and back to Cotonou. With the car and all guides for the two of us it came to €130. The only extra was our lunch but everything else was included. 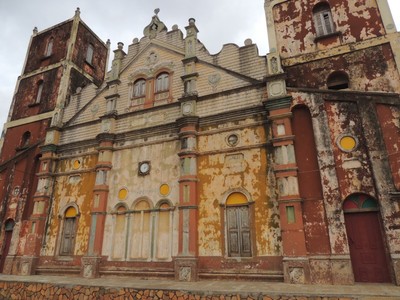 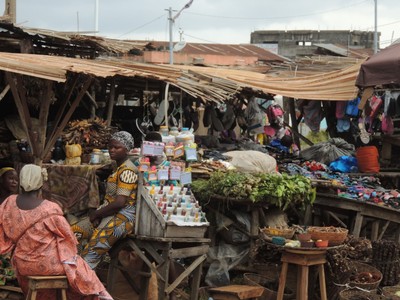 GANVIE
We took a private boat (part of the tour) and we were brought around the water village of Ganvie. This is a fantastic experience to see anything like this. Stopped at a local but very ‘touristy’ place for lunch and a few souvenirs. This was the MOST EXPENSIVE meal we had on our entire trip so please be warned. 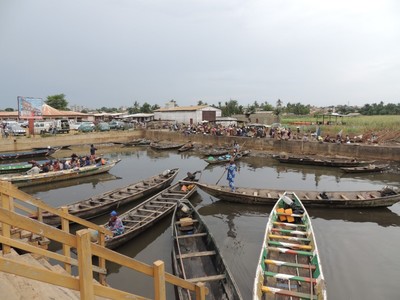 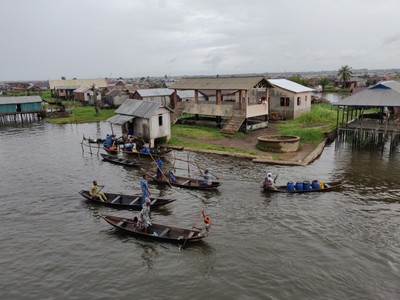 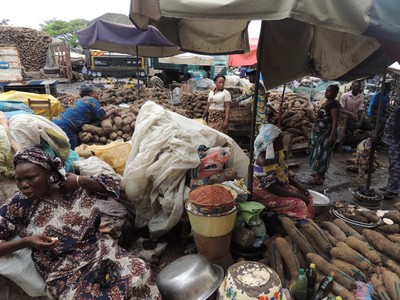 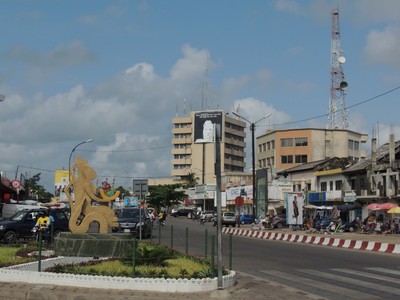 Could this be done on your own- off course, but on our day one we wanted to see as much as possible and this definitely did that for us. We didn’t waste any time on the day trying to find anyone to get us around, which was great. Off course we paid for this privilege ????

DAY 2
COTONOU to OUIDAH
After another uneventful breakfast (I see a trend coming here) and with our bags we took a zemidjan (a motorbike taxi) from the side of the road to bring us to the Place de l’Etoile Rouge where we could get a shared taxi to Ouidah. We zipped through all the traffic and paid 300CFA each for this ride. What an experience! The guidebook warns about zemidjans for not being safe, which by European standards is probably true. But at the same time the streets are busy, and they do not ‘fly like crazy’. No you don’t get a helmet, but you are in a very different world. 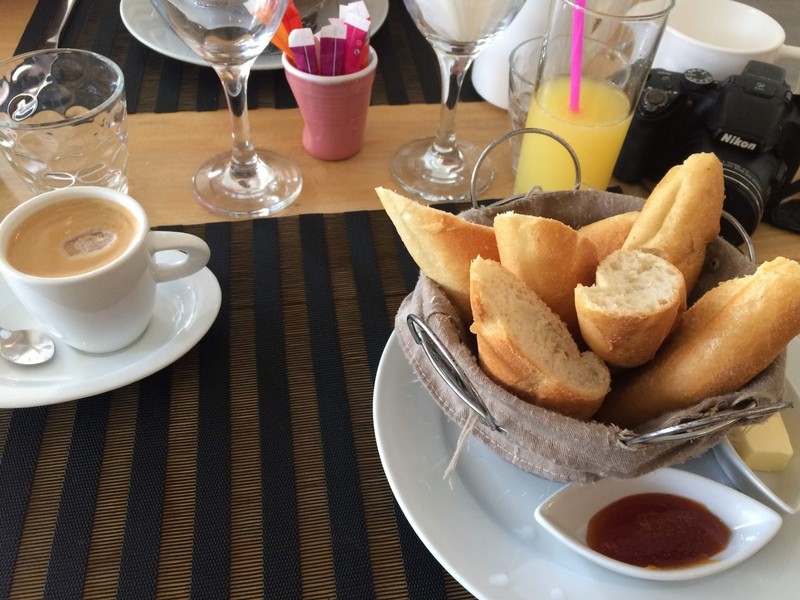 We asked around who might be going to Ouidah as there was no apparent place where the shared taxis are parked. We learnt our first Benenese lesson that someone knows someone and someone owns something (even the actual location of the kerb) and within seconds there was a shared taxi going to our location with other people in it. Magic. After a few, but straight-forward negotiations, we agreed on a fare of 1.000CFA per person. Then the driver was looking for 2.000CFA, but after us stepping out and not agreeing to pay a dime extra he was OK to continue further on the trip.
Along the road the car stops if there is a fare and more people get on board. Max capacity at the front is the driver + 2, at the back is 3 (however we had a trip with 4 of u at the back once). Personal space is a rare commodity, but for a couple hours out of your life it’s manageable. 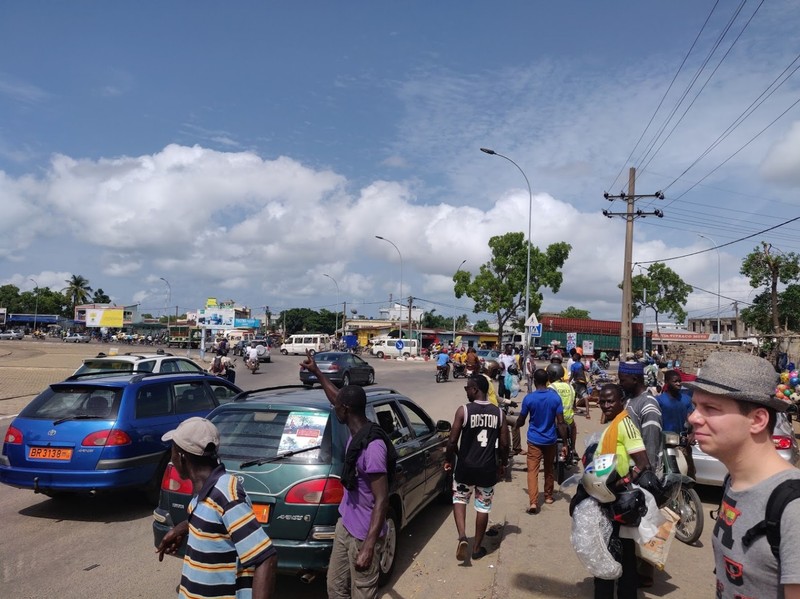 OUIDAH
We truly liked this place. Was good to be out of the madness of Cotonou and experience a more tranquil place in Benin. We had an idea where to stay, but after getting there and finding out that they were full (only 6 rooms in the place) we were recommended another auberge. We walked there, agreed on a fan room for 10.000CFA + petit dejeuner simple for 1.500CFA each and got ourselves settled. The auberge was on the main road (RNIE1) which is bit out of town, so we just used zemidjans again to get around (300CFA each a ride). Not a big deal.
It was scorching hot during the day and standing on the beach beside the Gate of No Return felt even more sad thinking about all the slaves that had to walk to here from the town in this heat to ‘start’ their journey across the Atlantic. Journey of No Return… 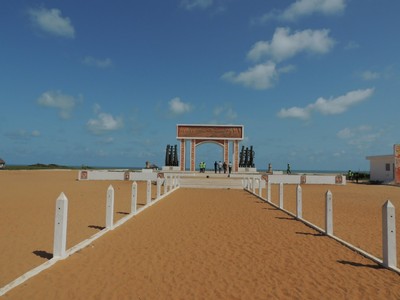 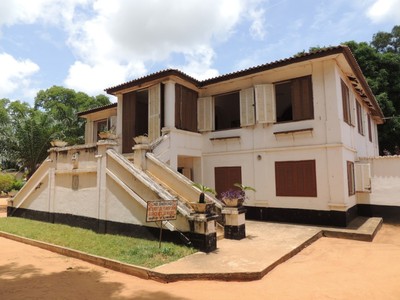 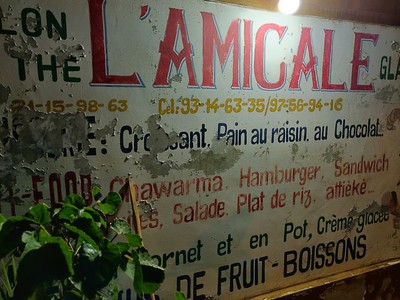 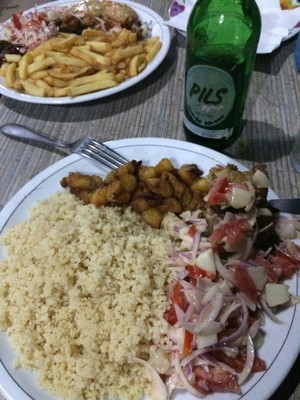 DAY 3
OUIDAH to GRAND POPO
We were on the way to Grand Popo. At this stage we knew the ‘system’ and just stood at the side of the road looking for a car heading our way. Another gentlemen was standing there with all his cargo looking for a ride (but going to a different place I think…To be noted- our French was limited so our understanding of what’s going on even when someone explains was that bit limited ????). I think he stopped a car going our way. Don’t ask why or how- car just stopped and we agreed a price of 1.000CFA each and we were on our way.

GRAND POPO
It’s a small place and not much to the town. But the beach front location is a beautiful one with the sound of the waves crashing to the shore. We found a lovely local bar/restaurant that served very cold drinks and very good food at local prices. Win win here! 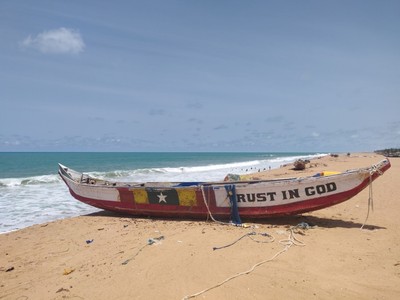 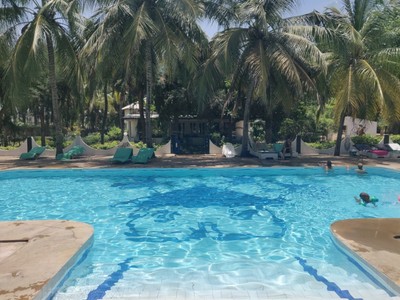 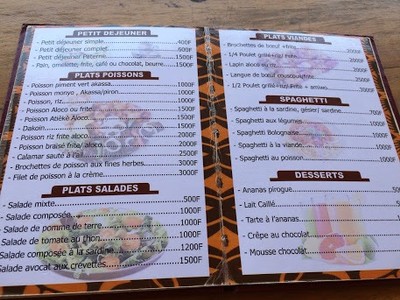 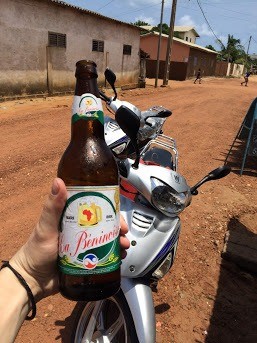 DAY 4
GRAND POPO to the border crossing of TOGO
We needed to get to the border and try to cross in to Togo. All the same again and another shared taxi from the side of the road (800CFA each).
We got off just shortly before the border as we had to change some € in the bank (another cool down in the air-conditioned office!) and walked the last few hundred meters to the actual border check.
No issue leaving Benin as the officers just looked at the visa and stamped our exit and wished us all the best. 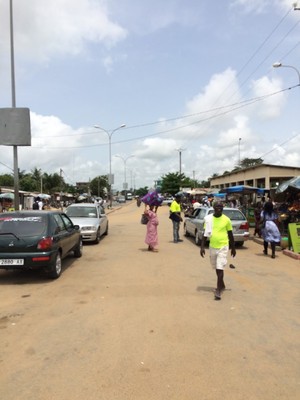 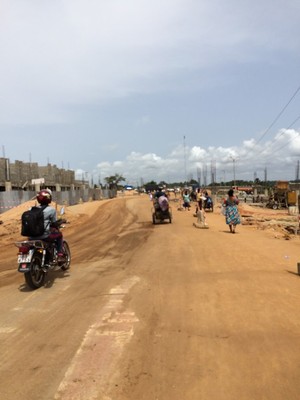 Now we were in no man’s land and hoping for the best to secure a VOA in Togo.
Goodbye BENIN. Off we go…